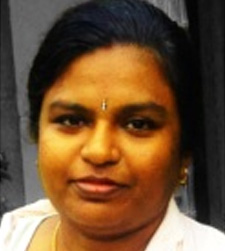 Dr. Sailaja G. S. received her M.Tech. (First Rank) from Cochin University of Science and Technology (CUSAT) in 2001. She has received her Ph.D. in Biomaterials from Sree Chitra Tirunal Institute for Medical sciences and Technology, India in the year 2008 for which she was awarded with the prestigious SPSI Gold medal for the Best Ph.D. thesis. Soon after, she joined as a post-doctoral researcher at Curtin University of Technology, Australia (2008). After a term as lecturer in CUSAT she worked as post-doctoral research associate in University of Illinois College of Medicine, USA (2010 – 2012 Jan) and Tokyo Institute of Technology, Japan (2012 – 2014 Aug). After a short service as a Project Scientist at National Institute for Interdisciplinary Science & Technology (CSIR-NIIST), India, she joined as Associate professor at CUSAT in July 2015. She is the recipient of several national and international awards like Young scientist award (Kerala state), Indo-Australian best paper award, Best paper award (IIT Madras), Travel awards from DST and CSIR (Govt. India)etc. One of her research papers was listed in top 25 hottest articles, SciVerse Science Direct. She has been offered the honourary associate membership by Society of Biomaterials and Artificial Organs - India. She has four Japanese Patents (3 granted and one filed). She is a reviewer of many international journals like ACS, RSC, Biomedical Central, Elsevier, J Colloids and interfaces etc.