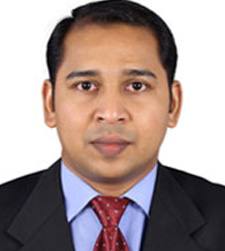 Dr. Baby Chakrapani P. S. is currently working as an Assistant Professor at Department of Biotechnology, Cochin University of Science and Technology. Before joining the Department of Botechnology, he was working as a Post-Doctoral Researcher at Van Andel Research Institute, Michigan, USA (2013-2015). He also worked as a Research Fellow at Department of Pharmacology, National University of Singapore (NUS), Singapore during the period (2011-2013). He received Ph.D. degree in the area of Neural Stem Cell Research from Centre for Neuroscience, University of Freiburg, Germany in 2011 and the M.Sc. degree in Biotechnology from Cochin University of Science and Technology in 2004. He also worked as a Research Associate at Indian Institute of Technology (IIT), Kanpur, India during (2004-2005). His academic interest and research focus includes Neuroscience, Stem Cell Research, Neurodegeneration and Neuroregenerative therapies.